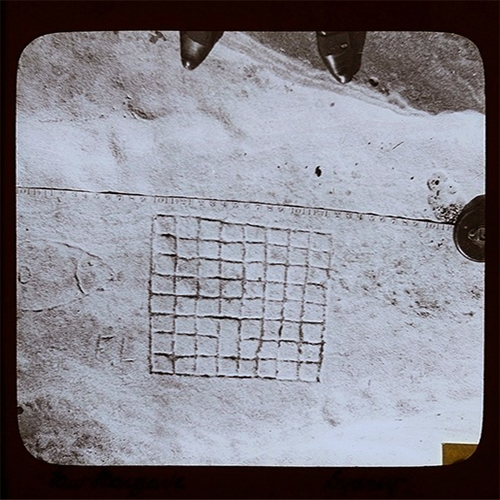 My colleagues Dr Elisa deCourcy and Dr Martyn Jolly at the ANU recently alerted me to the existence of a collection of magic lantern slides showing rock art in the National Library of Australia. Thanks to their tip I ordered the collection from cold store and went along to look at them in the pictures reading room. I was given two large boxes which enclosed large glass plates, which left me a little surprised. My first thought on seeing the glass plates was ‘I didn’t realise that they made such large lantern slides’ (they actually did) but I soon came to realise that these were actually glass plate negatives. Overall they were an odd assortment of images, including hand-drawn maps, reproductions from books, Sydney Harbour-side views and photographs taken ‘in the field’ of rock formations and rock carvings. Some of the latter were complete with tape measure and labelling, indicating an early 20th century effort of rock art recording. By far the most compelling plates within the collection, however, were a series illustrating rock art of the Sydney region.

It became clear that this set of plates was in fact a visual argument, that had been constructed by the gentleman-inventor Lawrence Hargrave. There were no associated notes or captions accompanying the collection, which forced me to read the images on their own and try to interpret the line of reasoning. Meanwhile my colleagues Elisa and Martyn assured me that they had seen a case of magic lantern slides, not glass plate negs, which confirmed my impression that the plates were made with the express purpose of illustrating an argument. Elisa and I later revisited the NLA, with both parts of the Hargrave collection at our disposal for comparison.

Image: Photograph by Elisa deCourcy, reproduced with permission of the National Library of Australia