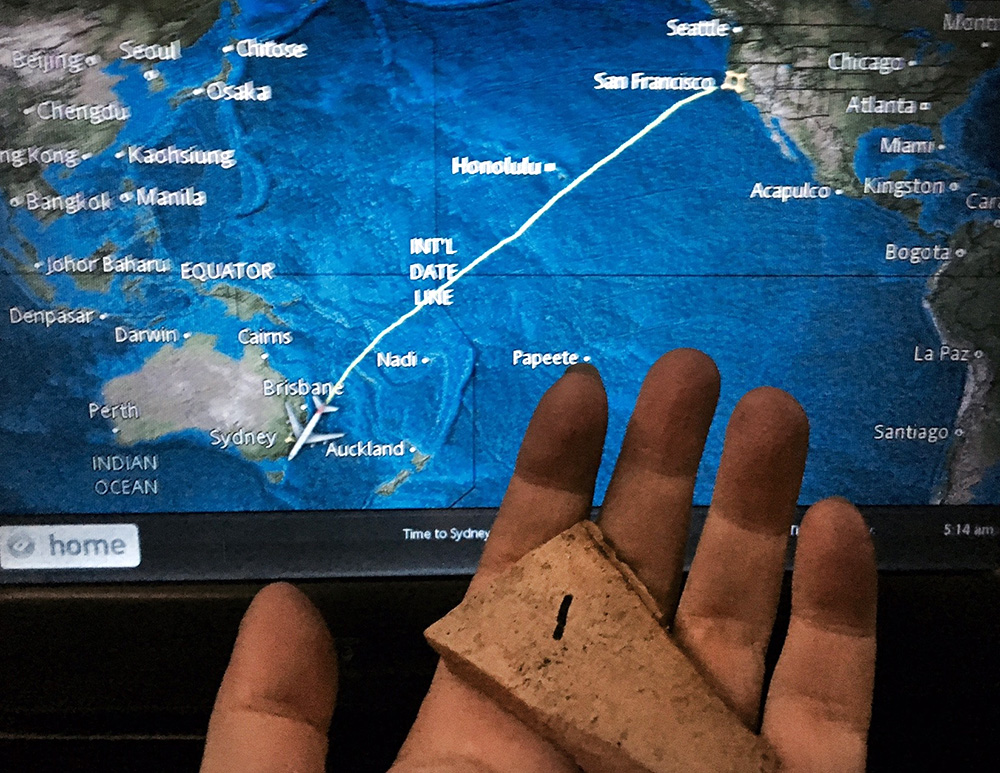 In May 2019 I attended a presentation by Doug Bailey (SFSU) at the Theoretical Archaeology Group USA conference in Syracuse entitled ‘Beyond Interpretation and Explanation in the Archaeology of Art’.

During his presentation Doug proceeded to take a hammer to a historic period amphora that had been pieced together after being found during excavations that preceded the building of the Transbay Transit Center in San Francisco. Immediately following his presentation Doug invited audience members to participate in his project Releasing the Amphora, involving the dispersal of the smashed fragments.

As one of several amphora fragment guardians I have carried amphora fragment #1 (A1) with me to several locations, and documented its emplacement in a few of these contexts, including the south and north coasts of NSW. Shortly after I became custodian of (A1) I photographed our arrival into Sydney Australia, after a 15 hour flight direct from San Francisco. We were both feeling a little worse for wear. A few months after being back in Australia I went down the coast and I thought it would be nice for A1 to look back across the Pacific at its former home. I also sent through some other images of a trip A1 and I did for my fieldwork in Nambucca Heads, NSW where I am researching the role of vernacular creativity and community placemaking through the lens of art and contemporary archaeology.

Doug is currently writing about this project and has a FB page incorporating some of the photographs documenting the Amphora’s circulation since its release. A video of Doug’s talk explaining the project in more detail is also there to view: https://www.facebook.com/Releasing-the-Amphora-347052559341222/