I have previously mentioned my research visits to the National Library of Australia to view a collection of magic lantern slides and glass plate negatives made by aviation pioneer Lawrence Hargrave. It’s fair to say that the collection still haunts me – in part because of the concerted effort Hargrave went to in order to convince others of his strange Lope de Vega theory about the 17th century Spanish discovery of Sydney – but also because of the sheer materiality of his work. This is evident from the glass plates, where we can see the work of the hand in painting out the glass, to create a ‘line drawing’, and the things ‘outside the frame’ of the image, such as the wood he has pinned pictures to in order to make copy slides. It’s these marks of production that are captured on the plates that really intrigue me and first inspired me to want to make something else of this myself. I’m particularly drawn to the rock art line drawing plates and the striking colour of the orange construction paper that has been attached to their backs in order to block light.

I have returned to this material because I am currently writing an extended article about this collection for inclusion in a volume, co-edited by Dr Martyn Jolly and Dr Elisa deCourcy, due for publication in 2020.

My first experiment in making something with my photographs of the backs of these plates (the side unintended for viewing) is above and draws on the making behind the lecture and upon the approach of my paper – the ‘colourful’ argument Hargrave constructed to persuade others of his line of thinking regarding the Spanish exploration of Australia. 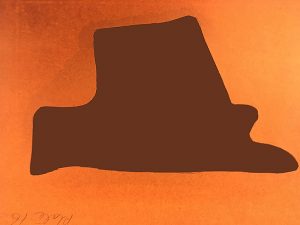