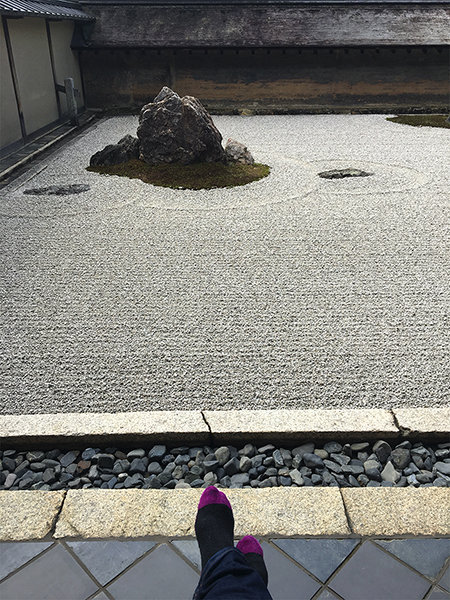 Last year I gave a presentation called ‘Multiple Exposures: Encountering heritage meanings through art making and viewing’ at a symposium called irreplaceable, convened by Tracy Ireland and Steve Brown, held at the University of Canberra. I specifically drew links between my own artistic efforts to engage with a heritage site and other artistic responses to heritage places. In my provocation I suggested that artists have an important role to play in cultural heritage interpretation and discourse and proposed that heritage practitioners and institutions might also be more creative in their application of photography and other visualising techniques. To make my case I referred to the World Heritage listed site of Ryoanji Temple in Kyoto, Japan. Ryoanji was World Heritage listed in 1994, as one of 17 Monuments of Ancient Kyoto. It is regarded as one of the finest examples of the Zen rock garden or ‘dry landscape’ tradition, which incorporates sand or gravel raked in patterns around larger natural features. At the time UNESCO’s public image gallery featured fairly ordinary photographs of the site: A close up of the raked rocks reflects the traditional technique of  gardening, ie one of the values for which the place is important, but for the most part there were no inspiring images of the kind you might expect of World Heritage. There are, I proposed, enormous possibilities for creating a more compelling suite of images and I presented as an example David Hockney’s two photographic collages Walking in the Zen Garden at the Ryoanji Temple, Kyoto, February 21st, 1983 and Sitting in the Zen Garden at the Ryoanji Temple, Kyoto. 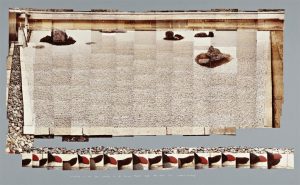 One thing that interests me about these two collages, when viewed together, is how dynamic Hockney has made his experience of sitting, as an active contemplation that takes in various details of the setting; and how relatively fluid yet calm and coherent is his walking, despite the staccato quality.  Both Ryoanji collages demonstrate how creative practitioners can elicit or illuminate the values underpinning or associated with a particular heritage place or practice. Through juxtaposition and repetition, Hockney draws attention to the rhythms of the raking, the stones, and the way heritage is enacted through the body. There is something about his ability to consolidate time, space and movement in the pictorial plane that urges us to contemplate the image as we would the Zen garden it conveys. In doing so it also draws attention to the philosophical and cultural traditions that Ryoanji encapsulates.

Hockney’s Ryoanji collages show the possibilities of artists using photography to activate heritage in new ways. So when I went on a holiday to Japan with my mother I took the opportunity to experiment with how I might picture Ryoanji Gardens in a manner which reflects my experience; the spatiality of the place and the inspiration that others seem to find by simply sitting and being there. One of my image-experiments is below.