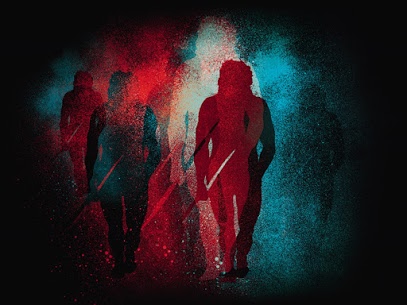 I recently visited the Musée de l’Homme during my research trip to Europe and had the opportunity to see the Néandertal l’Expo currently on show there. It was fascinating to see a contemporary take on the Neanderthal, particularly in the context of the museum’s other displays. There were two key threads to the exhibition which clearly stood out. The first was a concerted effort to account for the histories of representing Neanderthals across a range of visual media, from artworks to comics and film posters. These images and, to a lesser extent, the ideological frameworks that underpin them were addressed with a critical lens. Text panels in French and English discussed, for example, the trope of the club. This curatorial focus on an awareness of how Neanderthal has been pictured may also explain why the exhibition generally seeks to avoid a reliance on skeletal material, artefacts and data visualisations to represent current theories about the place of Neanderthals in evolutionary schema.

Rather, the abstracted and fragmented impression of Neanderthal, was juxtaposed against the previous stereotypical renderings of the species that appear in popular culture and historical illustrations. Even the contemporary representations of the Neanderthal that do appear within the exhibition are either schematic figures in a very clever and visually compelling series of animations or in the shadowy forms and bold silhouettes that appear in the promotional graphics. That is, until the end.

And this is where we reach the culmination of the central narrative that drives the show. Which is that neanderthals are just like you and me. And in case you missed it in the concerted deconstruction of previous imaginings of what Neanderthal was or in the efforts to link visitors, via their DNA or mirrored image on the evolutionary tree, to Neanderthals it is literally writ large in a huge word cloud that wraps around the final room. To reinforce that parting message you are greeted by a reconstruction of a small-statured model of a female Neanderthal dressed in contemporary clothing.  Outside the curatorial space visitors are invited to participate in this narrative by submitting to some kind of facial recognition/simulation software that converts one’s appearance to

I found  this infotainment exercise of Neanderthalising the self to be quite a fun and interesting imaging experience. I’m not sure that it made me feel a connection to my ‘distant cousins’ but it certainly broke down language barriers. Me and the elderly French lady sitting next to me both broke into laughter at seeing our faces reconfigured.