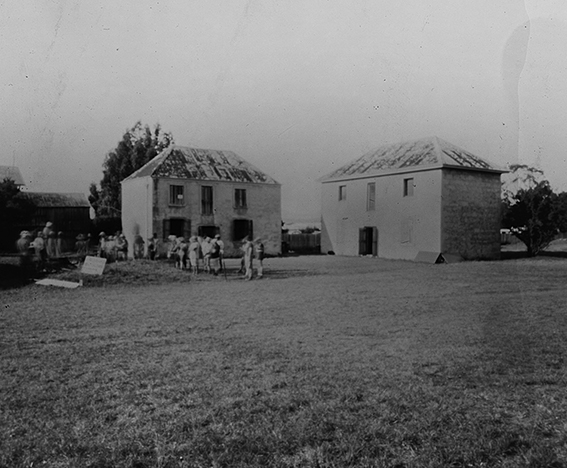 While I was in Tasmania, as part of my fieldwork at Triabunna I made use of a Harman pinhole camera. Prior to leaving Canberra I prepared six darkslides with Ilford Multigrade paper that I had cut down to the camera’s 4×5 dimensions. I have not previously used pinhole cameras for my own artwork and I anticipated that the results could be quite mixed.

My main aim was to use the camera during a day visit to the Port Arthur Convict site. I wanted to explore the relationship between this lens-less technology with its infinite depth of field and the history of the site as an expression of the nineteenth century ‘model’ prison. I had begun work on a visual essay around these themes, which incorporates my own photographs entangled with historic images. My focus on photography and lines of sight was inspired by my own experience of the 21st century Port Arthur setting and by understanding the role that observation played in the structuration of the prison landscape. Institutionalised techniques of surveillance, solitary confinement and deprivation of the senses were all features of the ‘separate prison’ environment. Hence, part of my photo-based enquiry was to consider how these aspects of the Port Arthur prison experience and its history as a place of punishment may remain or be rendered visible in the landscape of the present. The peephole in the door of the isolation cell is an evocative example of a two-way line of sight and point or moment of visual encounter between the prisoner who is held and the guard, or ‘overseer’ peering in on him. This peephole had a strong impression on me during a previous visit to Port Arthur and the pinhole camera came to mind as a kind of analogy.

What is the effect of a small point of light in a darkened chamber? And what impression might a momentary opening cast on the mind and leave on the paper? 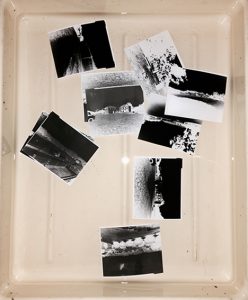 Considering the exposure time guesswork involved the process was more or less successful, though some of the paper negs were very contrasty. Despite compensating for the intensity of Tasmanian sunlight and the extra light bouncing off so much stone and brickwork, it was difficult to gauge the exposure time without a light meter or scope for testing. Overall I am pleased enough with the results and anticipate using a couple of the negs as part of the visual essay mentioned above. Once that is published I will provide a link to it here. In the interim I’ve included one of the shots I took at the Triabunna Barracks during morning team briefings.